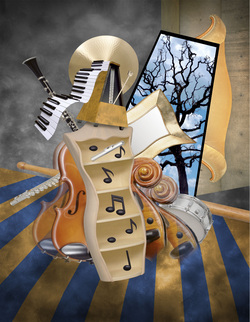 Music has the ability to help humans to express their fillings like happiness, sadness, pain aggressiveness and others .Moreover it allows people to communicate with other humans , with the divine or to allow himself in the pleasure of a dance and forget all his problems . All civilizations have a variety of scripts or narrations  that point  the affect of music in the psychology of humans and report achievements of music or show therapies that were full of success with the help of music . This is very obvious in Greek mythology , in ancient Greek literature  as well as and in mythological or historical texts of other  civilizations . Others , new investigators  do not agree with the paranormal elements and believe that music is clearly a social art . We can refer as an example the German investigator C. Schwa be.(1993).

In Greek mythology music is the main occupation of the Greek god Apollo. Te terms of reference of the god Apollo are various and this is obvious through his interference in various levels.  Apollo as the god of music and poetry had as a symbol the lyre that had received as a gift from Hermes that had invested it.

One of the most famous mythical musicians of ancient Greece was Orpheus, a strange form of musician without the clear attributes of a god or a hero. Orpheus with his divine songs, could witch every living thing as Aeschylus and Euripides report.

Also Orpheus had followed the Argonauts through their journey to give them courage.

The musician and religious teacher Mousaios was Athenian from Eleusis and he was also contemporary of Hercules and Theseus. Mousaios had given himself into the music not only because he believed in it’s aesthetic value but also for it’s magic use, which he was using to cure diseases.

Also another form of curing diseases was threnody the known ancient funeral song that could outsourced and take the pain away that the missing of a beloved person causes.

We could refer to other examples, but we can already see the power of music and it’s beneficial and sometimes healing power to nature and to the human himself. And just the myth of Orpheus only, indicates with sharpness the faith in the magic power of music. Faith that it is older than it’s charming  function.


In the Bible, the king and profit David, the brightest and most famous form of Israel history, is an excellent guitar player and also a great warrior. More precisely, in the historical book Βασιλείων Ά it is referred that David’s fame as a guitar player has came to the ears of king Saoul, that invited him to amuse  his melancholy and his manic mood of which he was occupied, with it’s harmonic playing of his guitar. The one that generates the interest is not the healing influence of the music in the depression of Saoul, but the fact that even the courtiers that were in the same room with Saoul had realized the healing value of music.

The same story is repeated in Spain many centuries later. When Heller, (1987) reports the cure of the king of Spain Philip the 5th with the help of music.  The incident that is referred to the cure of the king of Spain has been recorded and referred for the first time in the book of music therapy from the British musician Charles Burney in his book A General History of Music that came out in 1789. According to the history, king Philip the 5th  who was suffering from chronic depression , find the cure through the music of the famous baroque Italian musician who was also and his favorite, Farinelli. It is noted that Farinelli fled to the Spanish court around 1730. The king was so pleased from Farinelli’s music that the symptoms of his depression disappeared immediately.


Some of the musical instruments have a particular relationship with the therapy. As an example we can take the Pan Pipes. According to myth Panas fell in love with one nymph from Arcadia. The nymph that was frightened from Pans chase she begged Zeus to save her. So the moment that Panas caught her she turned herself into stubble


After the brief historical review of the healing part of music in Greece mainly, let’s see now  what happens to Europe when, since the 18th century efforts are being made to achieve the scientific use of music therapy.

One of the first attempts was that of J.Bonnet who in the early of 18th century he published his treatise “The history of Music and it’s effects”. Along site, the same time, the treatise of Dr. Chomet is published with the title “ Effects and influences of music in health and in diseases”

But this period, the most remarkable effort was that of the doctor and amateur musician Louis Roger from Montpellier of France.

In 1748 , Roger published two parts of his treatise about the effects of music in human body. The first part of the project discusses the nature of the resonators and the transmission of the sound waves through the air. In this part it’s mentioned in the ear, the transducer of hearing. The second part, which is consisted of three chapters, examines if music is capable of effecting humans and in what ways this can be done.

There after, an other French doctor, Esquirol from the town Toulouse studied consistently the role of music in the field of healing but without success.

Around 1840 great healers and investigators like U. Trelet and Dr. Leuret applied the first music therapy programs in Paris, in Salpetriere and in Bicetre.

In the 20th century the investigations of P. Fraise, R. Husson and the projects of Pontvik and G. Mall contain first in graphical form the psychological effect of musical impulses. In conclusion,  during the course of the 5th conference of psychotherapy (Vienna 1961) is formalized the use of music in therapy. In this conference was pointed that “the psychotherapeutic effectiveness of music can be used, codified and initiate  with the form of specific prescriptions.

The oldest report in music therapy was found in an unsigned article that published the Columbian Magazine in 1789 and brings the title “Natural Approach of Music”. This article sets out the basic principles of music therapy which are valid until today. The anonymous writer using mainly the ideas of the French philosopher Descartes develops ways of the use of music. He believes that with music can affect and adjust emotions. The conclusion of the article is most interesting, because there the writer expresses the view the good mental state can affect positively the physical health. In this point the writer insists that the music is an indefinite healing factor. In this article there is also an observation that is still relevant today. It is the view that for the right use of music in any therapy there must be also an appropriate trained music healer.

Another article that was written about the same period was that of nameless writer again that describes the case of a nameless teacher of music who was suffering from high fever. The article that was published in 1796 indicates that after two weeks of the disease a concert was given after the request of the teacher that make all the symptoms disappear but reappeared after the end of the concert.

Both writers supported their conclusions in the effectiveness of music, like it happened through this random incidents. However they didn’t  support their views with scientific observations.

Although today with the current data their conclusions don’t have dependability in duration of the 18th century urged many people to the use as a healing way.

During the 19th century many writes wrote about the functions of music in musical newspapers, medical newspapers, psychiatric magazines and medical expeditions. All these reports are various in quantity and quality and support the use of music as an alternative treatment or as an additional treatment in the traditional medicine.

At first two students of medicine Edwin Atlee and Samuel Mathews of the University of Pennsylnania were the first students that referred to the music therapy. Between the sources that are  referred in their scripts the most important is this one which is referred to the physic and psychiatrist Benjamin Rush that was a teacher at the University of Pennsylnania and a great advocate in the use of  in treatment of mental diseases.

Gradually, in the United States the 19th century music therapy has started to included to the programs of the studies of some schools for people with special needs. As an example  we must refer the visually impaired Perkins School that was created in 1832 in Boston from Dr. Samuel Gridley. The visually impaired school included and formed with the help of great musicians a pioneering music program of studies. The example that this school has set was followed quickly by other schools.

The integration of music in education of the people with special needs brings back the concern around it’s healing part.

The same century except the musicians, doctors, psychiatrists and other personalities are starting to interest in music therapy and encourage its use as a science in the United States. But unfortunately, they work independently each of them and the profit it’s very small. The only positive thing from their interest is the writing of many scientific articles about music therapy mainly from doctors.
·         Music Therapy in 20th century

In this century music therapy is starting to gain ground, more and more doctors, psychiatrists and musicians are starting to present occasionally incidents of treatment with the help of music in scientific magazines, newspapers and popular literature. Clinical and experimental projects provide data that support this science.

In parallel, the general atmosphere in medical science is starting to transform. Mainly after the Second World War the views of the famous psychiatrist Karl Menninger for one holistic perspective of health are a new approach in the field of health care and boost the development of music therapy. The holistic model of health contrasts with the biomedical model based on  Cassia Dualism of Descartes.

In 1903 Eva Vescelius founded the National Medical Association of New York.  Also she published the short course magazine “Music and Health” in which the reader can find instructions for the treatment of fever, insomnia and other diseases with the help of music.

The first official lesson of music therapy in University was taught by Margaret Anderton. Anderton provide her services as a music therapist in the soldiers of the First World War that presented physical incapabilities and mental disorders.

Isa Maud Ilsen, musician and nurse, founded The National Music Company for Hospitals in 1926. She taught with M. Anderson music therapy in the Columbia University and worked in the music departure of hospitals of the First World War.

Harriet Ann Seymour worked with the veterans of the First World War and the patients with depression in the decade of 1930. She studied the effectiveness of some types of music in physical and mental disorders. Harriet Ann Seymour founded  the National Institution of Music Therapy in 1941.

However despite the efforts of all these people  music therapy hasn’t organised fully as a profession until 1940.